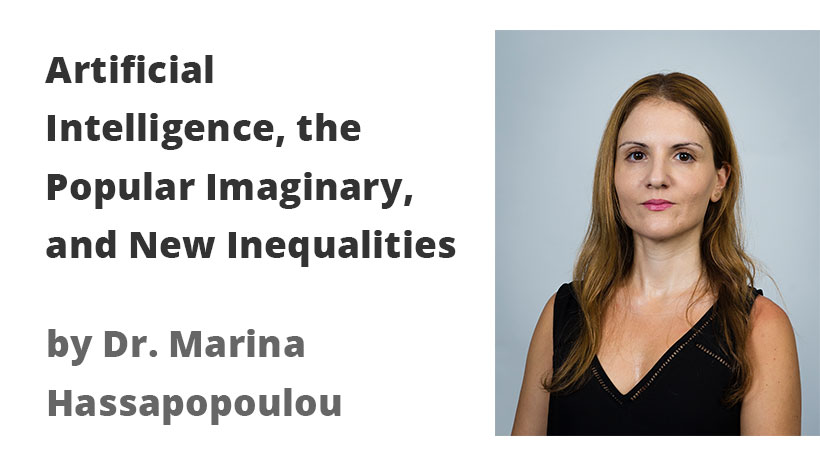 The quest for singularity through Artificial Intelligence is often heralded as the ultimate frontier of technological advancement. However, with the techno-scientific breakthroughs moving at an increasingly fast velocity, the ethical, environmental, and human-oriented impact is often neglected. This talk aims to approach A.I., machine learning, and algorithmic culture from an Arts and Humanities-oriented perspective in order to propose a more interdisciplinary accompaniment to techno-scientific research. By charting an international historiography of A.I. through popular science fiction and experimental media (including some of the first experiments with A.I. in cinema and early computational media), this talk will cover some ideological and epistemological overlaps between the Arts and Sciences, in hopes of reconfiguring more inclusive and diverse paths for A.I., machine learning, and algorithmic culture in the not-so-distant future.

Marina Hassapopoulou is Assistant Professor in the Department of Cinema Studies, and has served as the Associate Co-Director of the Moving Image Archiving and Preservation program for the academic year 2018-19, at Tisch School of the Arts, New York University (NYU). She has been awarded a Faculty Fellowship from the NYU Center of the Humanities for the academic year 2019-2020, where she will be working on her upcoming book, Interactive Cinema: The Ethics of Participation and Collectivity in the Era of (Dis)Connection. Her book project focuses on participatory multimedia experiments in the history of cinema and develops new frameworks for spectatorship in the digital age. She has published articles and book chapters on topics including interactive and software cinema, digital spectatorship and algorithmic culture, border cinemas and migration, experimental and Hollywood production, fandom, European cinema, hybrid pedagogy, expanded television, and digital humanities. This past year, she has also been involved in a new interdisciplinary initiative on decolonizing artificial intelligence, An[0]ther {AI} in Art, launched by Amir Baradaran, with the support of Columbia University and the Knight Foundation. Working on a range of media besides print, her projects include cultural videos for folklore archives, multimedia scholarship, as well as online open-access collaborative initiatives including: the student-focused Interactive Media Archive < https://interactivemediaarchive.wordpress.com >, the online directory focused on cross-pollinations between Cinema, Media Studies and Digital Humanities < https://transformationsconference.net >, and the recently-launched Weird Wave Archive < https://weirdwavearchive.wordpress.com >. In addition to publications, she is also working on a number of digital humanities and mixed media projects on topics including local activism, youth cinemas, artificial intelligence, VR/AR, and experimental pedagogy.