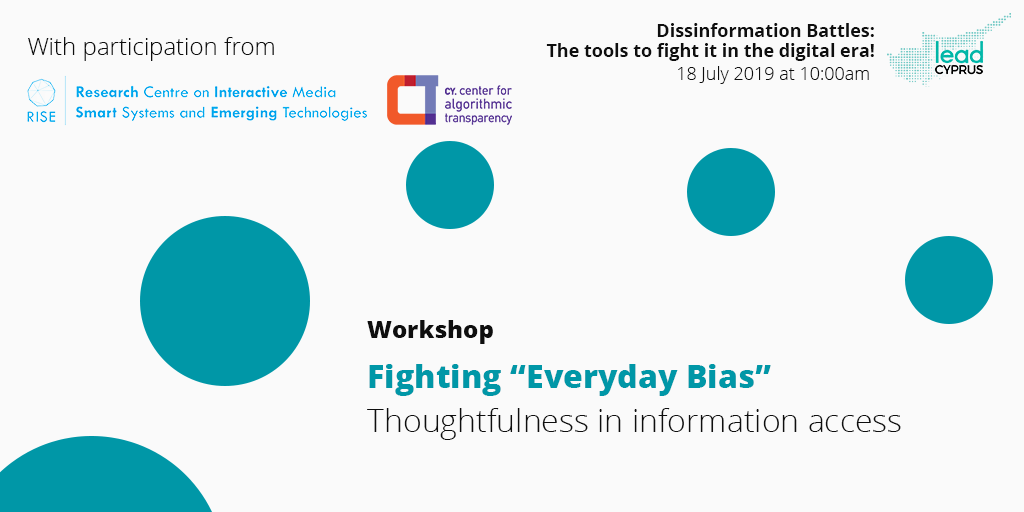 The workshop of Fighting “Everyday Bias”: Thoughtfulness in information access will take place in the full-day event of Disinformation Battles: The tools to fight it in the Digital Era, organized by LeadCyprus. This workshop is a collaboration of the Research Centre on Interactive Media, Smart Systems and Emerging Technologies (RISE Ltd) and the Cyprus Center for Algorithmic Transparency (CyCAT).

Find out more by following the Disinformation Battles Facebook event. Get your tickets through Eventbrite.

We live in a modern world where information is presented to us in a blink of the eye. We all rely on search engines and social media to find what we need from vast, online information repositories. However, studies have shown time and time again that most citizens are not particularly critical information consumers. Since many of the information services we rely on everyday have been created from the giants of the tech industry, there is a tendency to connect their brand name with trust; however, we often forget to question the validity of that information. In recent years, we’ve seen countless incidents of Algorithmic Bias and Discrimination in several platforms or end-user products. Fairness, Accountability and Transparency (FAT*) is an emerging area of research, in which experts are developing ways for identifying, measuring and mitigating algorithmic information biases. Protected groups of individuals may be negatively affected when issues of bias exist. For instance, when it comes to gender or race equality, algorithmic information filtering can exacerbate existing inequalities. In this workshop, we will present two tools for cultivating user thoughtfulness when using information access platforms. One is focused on search, and one concerns algorithmic image processing.

Styliani Kleanthous Loizou (female, Ph.D., University of Leeds, UK) is a research scientist at the CyCAT, Open University of Cyprus as well as the Research Centre on Interactive Media, Smart Systems and Emerging Technologies (RISE – P8). Styliani’s main research interests and expertise are concentrated in the area of User and Community Modeling, Personalization and Adaptive Systems. She specializes in exploiting psychological and social theories for modeling user preferences, for designing intelligent interaction and adaptive user support.  She has published over 25 papers in journals and scientific conferences, co-organized a number of international workshops and has given numerous presentations. Since 2004 she has been involved in different UK and EU-funded research projects for establishing requirements, modeling users and providing adaptive support for collaboration, learning, medical data analysis and identifying innovation networks.

Kyriakos Kyriakou (BSc, MSc Computer Science) is currently working as an Associate Researcher at the Transparency in Algorithms (TAG) Group of the Research Centre on Interactive Media Smart Systems and Emerging Technologies (RISE) in Cyprus. He holds a BSc and an MSc in Computer Science from the University of Cyprus (UCY). Kyriakos’ early work focused on Model-Driven Engineering specifically Model-Driven Engineering for Internet of Things Devices using Microprocessor Platforms. Later on he focused on Analyzing Image Tagging Cognitive Services for Emotions Stereotyping in Respect to the Gender and Race of the Depicted Persons. His current research interests focused on Algorithmic Fairness, Accountability and Transparency (FAT*). He is also involved in entrepreneurship as a co-founder in several startups and ideas. Kyriakos is a Co-Founder at BadFive.com; a Tech related News/Media Company. Previously, he worked as a Special Research Scientist in Software Engineering and Internet Technologies Laboratory (SEIT Lab) of the Computer Science Department at UCY, getting involved in the coordination of various EU-funded Erasmus+ research projects.

Jahna Otterbacher received her doctorate from the University of Michigan (Ann Arbor, USA), where she was a member of the Computational Linguistics and Information Retrieval (CLAIR) research group. She is currently Assistant Professor at the Open University of Cyprus (OUC), Faculty of Pure and Applied Sciences. Jahna coordinates the Cyprus Center for Algorithmic Transparency (CyCAT) at the OUC, funded by the H2020 Widespread Twinning program. The CyCAT seeks to promote transparency and accountability in algorithmic systems that people routinely use, but that are rather opaque to them (e.g., search engines), through three types of interventions – data-, developer- and user-focused. In addition to her post at the OUC, Jahna holds a concurrent appointment as team leader of the Transparency in Algorithms Group at RISE (Research centre on Interactive media, Smart systems and Emerging technologies), a new center of excellence and innovation in Nicosia, Cyprus, in collaboration with two international Advanced Partners, UCL and MPI.